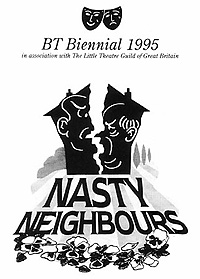 This was the third play to be sponsored by British Telecom as part of the "BT Biennial" scheme, in which Little Theatre Guild member theatres up and down the UK were invited to present the simultaneous world premiere of a new play. On this occasion no less than 100 LTG theatres participated.

The other BT Biennial plays, also produced at the Loft, were Happy Families (1991) and Shakespeare Country (1993).