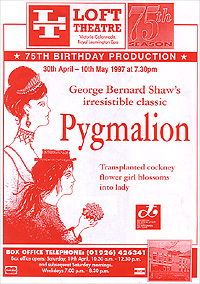 Pygmalion was chosen to mark the 75th birthday of the founding of the Leamington and Warwick Dramatic Study Club in 1922 as it was the first major play staged by the company (produced in 1925).